For more than a decade, the exceed centre ICDD, headed by the University of Kassel, has dedicated itself to the subject of “decent work”. 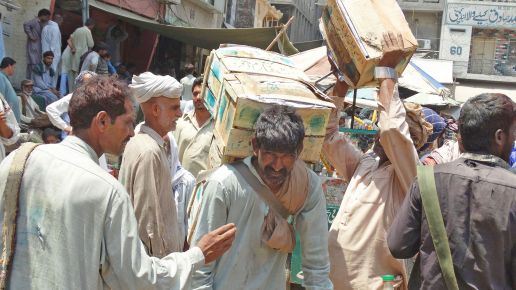 Pakistan is one of the most important mango exporters in the world. From the point of view of Dr. Mubashir Mehdi, this is a real success. “We see here how a traditional production system could be modernized and become competitive on the world market”, says the business economist and expert in supply chain management at the University of Agriculture Faisalabad. “The only problem is that especially those who work the hardest, the mango pickers in the fields, feel too little of modernization’s benefits.” Many still work as poorly paid seasonal labourers, up to 16 hours a day, without health insurance and social benefits, camping outdoors, plagued by mosquitoes, parasites, and pesticides.

Why is that? And how can it be changed? Mehdi is investigating these questions as part of the research project. It is part of the larger research network, which is managed and coordinated by the University of Kassel and to which a total of eight universities from eight countries belong. “Our main aim is to investigate the conditions for decent work worldwide”, says ICDD director Prof. Dr. Christoph Scherrer. “The example of Pakistan clearly shows that economic progress, important as it is, doesn’t automatically lead to social progress and thus better working conditions. In research on decent work, this aspect was neglected for a long time; we wanted to close the gap.”

The network, founded in 2009 and funded until 2022 as part of the , relies on an interdisciplinary approach: experts from sociology, business administration, agricultural science and engineering work together. “That was completely new for many at the beginning”, recalls ICDD Managing Director Birgit Felmeden. “At our first network meeting, the social scientists sat on one side and the agricultural scientists on the other and talked in completely different directions.”

Development and Decent Work has been established as a research focus at all ICDD partner universities. With its network of eight universities in eight countries on four continents, the ICDD has consolidated its reputation worldwide as a competent advisory institution on development issues. Because of its high level of expertise, the centre is asked to provide policy advice and has made itself available for numerous interviews and statements. It successfully supports organizations in developing guidelines on decent work. In addition, the project has raised the profile of the University of Kassel as an actor and partner in the field of sustainable development.

Then it quickly became apparent how effective the collaboration can be. Christoph Scherrer illustrates this using again the example of the mangoes from Pakistan. To optimize the supply chain in such a way that profit for the workers is higher, you have to analyse the processes from all possible perspectives, he explains. “The agricultural experts know which mangoes ideally grow where and how they have to be cared for so that they are not attacked by pests. Our engineers research how much cold storage has to be built and at what temperatures mangoes are best stored and transported. Our experts in sociology and political science analyse the general political and economic conditions.”

Enhancing the quality of research

With its diverse projects and activities, the ICDD contributes to the achievement of the Sustainable Development Goal (SDG) number 8: the promotion of lasting and sustainable economic growth, productive full employment and decent work. In addition to the management and coordination of research projects, a second focus is teaching. A graduate school at the University of Kassel has been training doctoral candidates since 2010, many of whom can now apply their knowledge as decision-makers in their home countries. Partner universities around the world also benefit in many ways from the expertise from Germany. Javier Becerril, ICDD coordinator at the Universidad Autónoma de Yucatán (UADY) in Mexico, reports that “[t]he possibility of academic exchange has brought us significant progress, also in terms of acquiring language skills. The quality of our scientific publications has improved significantly.”

Since the beginning of 2020, the ICDD has been in a transition phase. “The regular exceed funding expired in 2019; now, in the transfer phase, we have time until 2022 to acquire new third-party funding to ensure the continued existence of the network”, says Christoph Scherrer. In addition, the centres that have been newly sponsored since January 2020 can in this way be organizationally supported in the challenging initial phase.

The issue of sustainability, together with the challenges formulated in the SDGs, has become more visible in the German university landscape thanks to the engagement of the ICDD. With the Global Partnership Network (GPN) project, the University of Kassel has succeeded in founding another exceed centre that is concerned with research, teaching and education in the possibilities and limits of global partnerships in the areas of development cooperation, world economy and knowledge production. It is thus contributing to SDG 17 (partnerships to achieve the goals). “But that’s not all”, says Birgit Felmeden. “The University of Kassel is planning to establish a sustainability centre in which all SDGs are each mapped to a professorship.”